The three leading reader questions received via the Shanghai Scrap contact form are:

Well. Long-time readers of this blog may recall a series of posts that I wrote back in late 2008 covering the installation of several dozen new stained glass windows into Shanghai’s century-old Catholic cathedral (here, here, and here, among others; my lengthiest treatment of this project in traditional media is this 2006 piece for the now defunct LA Times Sunday Magazine). As commissioned by Shanghai’s bishop Jin Luxian, these windows aren’t restorations of the windows destroyed during the Cultural Revolution, so much as they are an entirely new cycle of stained glass that merges Chinese characters, idioms, and artistic traditions with Western liturgical art and stained glass. The artist entrusted with this unprecedented commission is Wo Ye, Beijing born and bred, trained as a traditional Chinese painter and, later in life, trained in Catholic liturgical art in Italy and the United States. There’s really nobody else with her background, and training, anywhere, and that not only explains the commission, but why she is – best as anybody knows – the only woman or Chinese to ever get such a commission.

In any event, not long after completing that late 2008 series of windows, Wo Ye took a one year leave of absence from the project for personal reasons. Her leave – and the absence of visible progress on the cathedral’s windows – led many to wonder if the project was halted. It wasn’t, and it’s not. As proof: this morning I paid a visit to Wo Ye in her studio not far from People’s Square, where I found her as strong as ever (the photo, below, is meant to convey that), and getting ready to resume work in earnest: 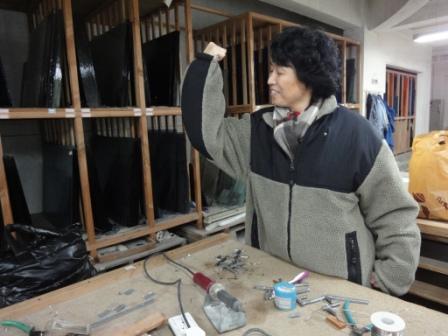 With a little convincing, she submitted to an exclusive interview. Here it is:

Shanghai Scrap: Do you want to say anything about your upcoming plans for the cathedral windows? Designs, anything like that?

Rumor has it that the second level nave windows are next. More when I have it.