The Atlantic has just posted my essay and slide-show, ‘China Rules the World at Expo 2010‘ to its site. Of the many things that I’ve  written over the last year about the Expo, this might be my favorite. The essay goes into the history of Expos, and where Shanghai’s fits into that, as well as the political symbolism inherent in the pavilion layout. Also, I’ve also made an effort to write some meatier photo captions than those that typically accompany this kind of feature. I think, too, it conveys some of my unabashed enthusiasm for the event. You can find it here. 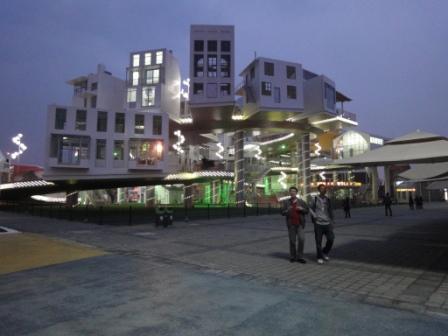 Above, from the slide-show: the Dutch pavilion, named “Happy Street,” is a series of houses built around a figure-eight shaped avenue. The unusual, whimsical structure is officially intended as an argument that the Expo’s “better city, better life” theme is best met at the most local level. However, some in Shanghai have interpreted artist and architect John Körmeling‘s design as a repudiation of the host city’s helter-skelter development pattern.