Over the last two days I’ve received a sudden and unusually large number of emails and phone calls related to the USA pavilion at Expo 2010. Combined with the growing number of negative and caustic reviews of the structure, I’m sensing that more than a few people are looking for an explanation as to how the United States managed to build a pavilion that commentators at Huffington Post have compared to – among other things – “a supply storage shed,” “a temporary NASA administrative building, circa 1970,” and “a combination Bose Sound System/Air Purifier.” I’m going to use this post as a brief guide for reporters and anyone else interested in finding out more about how this happened, as well as a brief guide to what questions still need to be answered and who might be able to answer them. 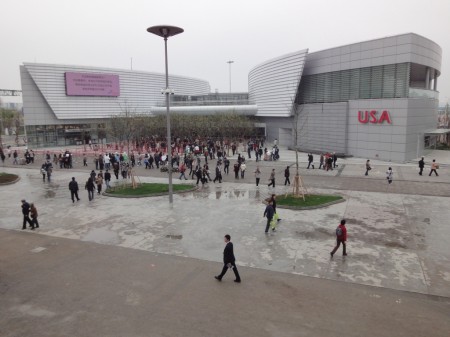 But first – if you’re looking for a quick route to understanding how the US arrived at its current pavilion, let me humbly suggest “A Sorry Spectacle,” my March 8, 2010 piece for Foreign Policy. In it, I give a concise chronology of events, the key players, issues, and documents. Additional source documents showing the total lack of qualifications of the team selected to manage the US pavilion can be found on my blog, here. What that article and those documents won’t tell you is how a Canadian architect was chosen to design the US pavilion, much less who was responsible for signing off on the  selection. Alas, the State Department refuses to answer questions on that subject. So, what follows, after the jump, is a rough chronology of the early stages of the US pavilion – the period when the design and selection would have been finalizes – with additional links to relevant documents and stories, on the evolution of the US pavilion to help reporters get their bearings, and perhaps provide some leads along the way.

So what are the outstanding questions related to the USA pavilion building?

I’m sure that others will have additional questions related to the USA pavilion. However, these, to me, strike as the most pertinent for understanding how the US ended up with such an underwhelming pavilion. Next, who is in a position to best answer them? In addition to Winslow and Eliasoph, I’ll offer the following names (there may be others):

Just as I’m sure there are more questions surrounding the USA pavilion, I’m just as sure that there are more names of people who can be tied to it. But these are the ones that appear to be most closely tied to the ill-advised and murky selection of Winslow-Eliasoph, and the even more disastrous defense of Winslow-Eliasoph when it was eminently clear that their design, theme, and efforts were sub-standard, riddled with contracts for personal friends and acquaintances, and lacking support among Americans in China.

I think it’s also worth noting that all of these individuals – all of them – are or were career Foreign Service Officers. That fact shouldn’t be taken as a strike against FSOs (I know many, many good and conscientious FSOs), but it should be taken as a warning about what can happen when un-elected bureaucrats are left room to maneuver by Congressional, public, and media ambivalence. To be sure, Congressional action limited the State Department’s ability to fund a US pavilion; but it’s also the case that the critically-derided USA pavilion design and programming is the collective responsibility of several career FSOs who defended and advocated for it. Somebody should tell that story.

[Note on comments. I’m going to continue my practice of disallowing comments to my recent USA pavilion posts, largely based upon my unwillingness to provide a forum for FSOs and others connected to the USA pavilion to defend themselves and attack me anonymously. If and when the State Department, the Shanghai Consulate General, and Shanghai Expo 2010, Inc (the non-profit managing the USA pavilion) get around to answering my legitimate questions about the pavilion, I’ll get around to re-opening the comment threads.]