Yesterday I spent 12 hours wandering Day 2 of the Expo’s Soft Opening and – like pretty much anyone who’s been down there in the last three days – I was alarmed by just how unprepared the staff (the volunteer guides only know their immediate vicinity; I checked), the grounds (basic landscaping was still happening in many parts of the grounds), and most of the national pavilions (construction was still in progress throughout the site) were for the onslaught of visitors (500,000 on Sunday!) to come this weekend. Not to put too fine a point on this, but: Shanghai was awarded the Expo on December 3, 2002, providing it roughly 18 months more than Beijing had to prepare for the Olympics. And yet, despite the shorter time frame, Beijing was so on the ball it released “We are ready,” a one-year-countdown theme song on August 8, 2007.

A theme song for Shanghai? Earlier this week Shanghai had to cancel the Expo 2010 theme song when it became embroiled in credible allegations of plagiarism.

Now, to be fair, the Expo is in soft opening mode – meaning, the organizers are supposed to be working out the kinks. But, as someone said to me this evening: “Some of those kinks sound like structural problems.”

As an Expo fan, I certainly hope that’s not the case. And I guess we’ll all know the answer in a week’s time. In any case, below, the Rus pavilion, as photographed (by me) at sunset, last night. 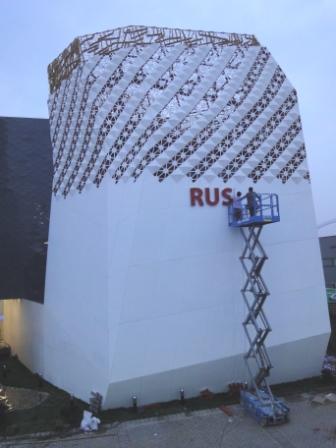 [Addendum 4-23: A quick clarification and addition in response to a comment, below, and a couple of emails. I don’t think that it’s at all surprising that Shanghai is running behind on a project that covers 5 square kilometers, costs billions, and requires management of hundreds of thousands of employees and volunteers. In fact, I think that any country would face similar problems. But that’s not how it was supposed to be. For the last two years – when people in Shanghai discussed Expo, there was an assumption that – because this is Shanghai – things would be different. The conversation (which has occurred dozens of times in my presence alone) often went something like this:

A: Do you think they’ll finish the Expo site on time?

In this case, “it’s China” typically means: due to their surfeit of money, people, and authority, the Chinese authorities would make sure – somehow – that the Expo was completed on-time. Nobody could every say exactly how that triple combo would result in an on-time completion. It was just assumed (an assumption that I shared, by the way). But now, one week out, some of those same people – including Chinese friends who are members of the media, the Party, etc – are confronted with an entirely different reality. Based upon their visits to the site (and mine), it’s becoming uncomfortably clear that some aspects of the Expo site – including human resources – will simply not be ready. And this goes against many assumptions about China’s (and the Party’s) supposedly unparalleled ability to marshal money, power, and people. My sense is that this is making some people very uncomfortable.]

[Addendum 2: In 2008 the Shanghainese looked north, to Beijing’s Olympics, and whispered among themselves and to their foreign friends: “We could do better than those bumpkins.” That sentiment, generated out of the city’s infamous and considerable cosmopolitan vanity, was no secret to its Beijing rivals.  And so, in the last week, I’ve been amused to hear several of my Beijing friends gloating over what might actually be a fairly eloquent, in-progress self-inflicted rebuttal down at the Expo site.]