I don’t know the name of Expo 2010’s Master Planner, but I’m sure that – whoever it is – has a good sense of humor. Why? This morning, while wandering the Expo (World’s Fair) site in search of the North Korean pavilion (see this evening’s earlier post), happened upon the Iranian pavilion – next door to it. 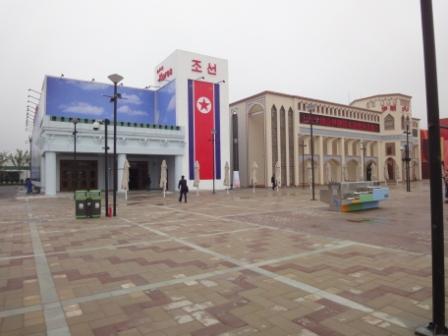 Now as even a casual student of US foreign policy misadventures surely knows, Iran and North Korea are the two remaining (living) members of the Axis of Evil, memorably fingered by President George W. Bush in his infamous 2002 State of the Union address. So the question then arises: is it mere coincidence that the Expo organizers placed these two countries – who otherwise have nothing else in common – next to each other on the Asia A-10 Square (hereby renamed “Axis of Evil Square“). Consider, too, that several of Iran’s other neighbors – like Pakistan – are clear on the other side of the Asia section of the Expo grounds. I do believe in coincidences, but this is just too much.