Sunday afternoon I visited a friend’s new apartment off Wulumqi Road in the heart of Shanghai’s rapidly disappearing French Concession. It’s been that way over the last few years: the old neighborhoods are being demolished, the old drafty tenements giving way to sealed up high-rises. You see it at street level all of the time, and a few photographers have made veritable careers out of documenting the evolution. But it’s rare that you get to see it presented from above (rare for me, at least). So I was surprised to see the century-long transformation played out below my friend’s new window. 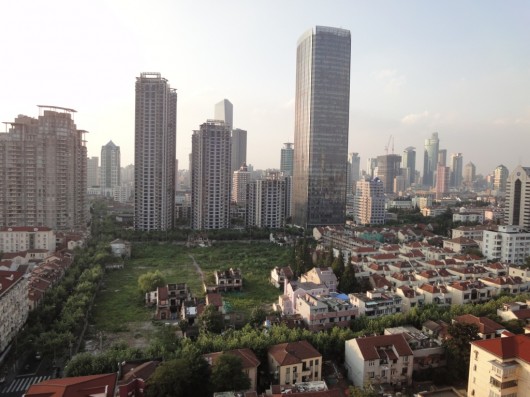 The handful of still-standing houses in the middle of the mostly empty lot at the center of the image are occupied by squatters (visible from above). To the right are tenements of the sort that once occupied the lot. And in the rear are the sorts of buildings that will occupy the lot whenever – and however – the developer with rights to it gets around to building.

[UPDATE: From the excellent comment left by R, below: “A bit of history. this lot has been open for more than 5 years now, and was the site of where an overanxious developer tried to use force to remove people. If I remember correctly deaths were involved, but that may have been a different site down Changle near Agave.

Anyway, the squatters are actually 7 residents who have endured life without water, electricity, or gas. Quite an accomplishment, and when we were speaking to one of the landlords at the Summit, it was clear that this was a process that was no where near being resolved …”

[A Note from the Staff: Long-time readers, and especially subscribers to the RSS feed, are aware that I’ve been on hiatus for the last five weeks. I’m back, both here and on twitter, and looking forward to re-engaging. And I think I’ll have more to say about re-engaging, after dis-engaging (from blogs and twitter) in a few days. I’ll also be blogging scrap, e-waste, baseball, my barber – and Expo. On the latter subject, allow me, for the moment, to send interested readers over to “Shanghai Shangri-La?” – Virginia Postrel’s excellent  essay on why Americans just don’t engage with World’s Fairs, anymore (a couple of additional Postrel thoughts on Expos, here). It’s terrific.]