In case you’ve never had the experience, here’s what it’s like to walk into a Chinese McDonald’s and have the cashier assume – on the basis of your looks – that you’re not Chinese: You are greeted in English, and then handed a bi-lingual English-Chinese menu (typically kept beside the register). More likely than not, though, you won’t need to point at the pictures or the English/Chinese menu items, because, typically, the cashier has enough English to understand when you’re ordering a McChicken, a small fries, and a large Coke. In fact, in my experience at least, many Chinese McDonald’s cashiers are eager to brush aside my attempts at Chinese so as to prove that they can speak English.

This is a rather remarkable phenomenon when you think about it. After all, how many other places in the non-English speaking world, much less the non-English speaking developing world, have the luxury of being able to stash English-language speakers behind the counter at McDonald’s? Not many. Indeed, in my travels, I’ve found that English or other foreign language training is reserved for the “educated” -ie, those not destined for McDonald’s. But China, which requires English language study by all of its students (of varying quality, of course), has English-language McDonald’s cashiers aplenty – supplementing its considerable and impressive ranks of English-language service workers elsewhere in the economy.

It’s something that I’ve noticed over the last few weeks, as I traveled to several developing, and developed nations (and their respective McDonald’s restaurants – a story for another time), not one of which struck me as being as English-language friendly as China. For example, consider this Brazilian McDonald’s, visited this past weekend at a hypermart in São Paulo. 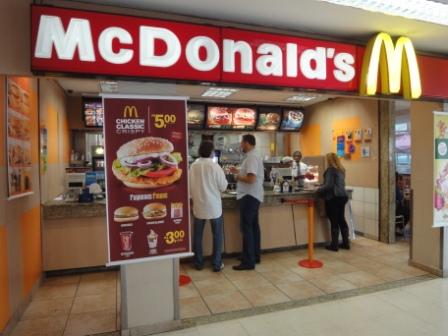 Signage aside, there was no bilingual menu, no eager English-speaking cashier. Instead, I found myself pointing at the pictures on the overhead menu, and miming the act of carrying a bag so that the cashier would know that I wanted my Salada to go. And, by and large, that’s the experience I had, two weeks ago, at a McDonald’s in the Ukraine (trust me: order the McBlintzes), where – in addition to my own troubles – I watched an American basketball player (mind you, a professional in the Ukraine) convey his order through an accompanying team assistant because the cashiers simply couldn’t get his meaning.

Now, before anyone misunderstand my meaning: I’m not advocating for English-language imperialism, or for Americans (like me) to remain linguistically oblivious when they travel abroad. Rather, I merely want to point out that – for the most part – it’s much easier for an English speaker to travel in China, than it is to travel in Japan (for starters: far more English in Chinese subway stations than Japanese ones), the Ukraine (try to find an English-language immigration officer at Lviv’s “int’l” airport), Brazil (see above), or any number of countries that are culturally, geographically, and politically closer to the Anglo-American axis. And this, in large part, is a result of China’s determination to learn and master English – a phenomenon highlighted a couple of years ago by Evan Osnos in the New Yorker:

A vast national appetite has elevated English to something more than a language: it is not simply a tool but a defining measure of life’s potential. China today is divided by class, opportunity, and power, but one of its few unifying beliefs—something shared by waiters, politicians, intellectuals, tycoons—is the power of English. Every college freshman must meet a minimal level of English comprehension, and it’s the only foreign language tested. English has become an ideology, a force strong enough to remake your résumé, attract a spouse, or catapult you out of a village. Linguists estimate the number of Chinese now studying or speaking English at between two hundred million and three hundred and fifty million, a figure that’s on the order of the population of the United States.

Just how remarkable is this phenomenon? Well, let’s put it this way: can you imagine a United States where the average McDonald’s cashier was capable of offering a greeting, a thank you, and taking a simple order in Chinese? If you can (and I can’t), then you’ve just imagined a very different United States. Now shift that expectation to China – on balance, a poorer, less educated, and more xenophobic society – and you’ve got some sense of the transformational power of this educational program over the last couple of decades. Nowhere else, in my knowledge, comes close.