[See Update 2, below for a brief explanation of why I’ve changed the title of this post from ‘One reason the US won’t collaborate with China on space exploration,’ to its current version.]

I’m a big fan of China’s space program (any space program, really) and nobody cheers louder when it pulls off successful missions. So, needless to say, I was thrilled to learn that China had launched its second lunar probe, Chang’e II, over the weekend. But my excitement was quickly tempered by photos of Chinese farmland littered with solid rocket booster debris that rained down in the aftermath of the launch (image from 163.com via shanghaiist). 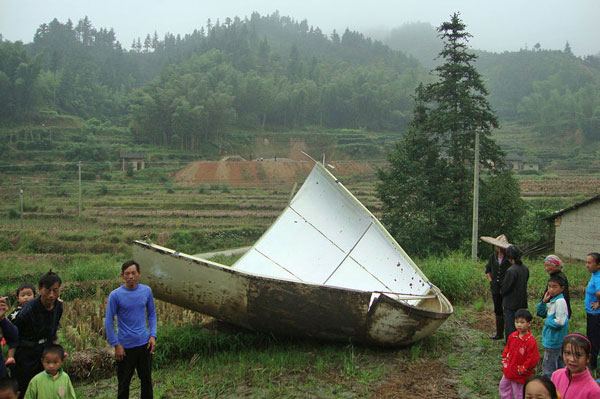 Now, I’m no rocket scientist, but I am a space buff – and like any space buff worth his salt, I know that – barring an accident – solid rocket boosters don’t just accidentally fall onto populated areas. Mission designers can predict with certainty where these things fall – thus, NASA’s ability to retrieve the space shuttle’s solid rocket boosters. In any case, this morning I received an email from an acquaintance who has worked with NASA in the past. With his permission, I quote (anonymously):

As an addendum, I think it’s worth pointing out that, in the past, the Chinese have launched US satellites from the same facility as Chang’e II, and that one of those launches – in 1996 – resulted in the destruction of large swaths of Xichang. That incident and others that place civilians at risk are among the reasons that the Chinese are building a new launch facility on Hainan Island. Presumably, once operational, that facility’s debris will fall into the ocean.

[UPDATE: In the comments, below, Sean – a frequent commentator – notes:

They do evacuate parts of three provinces that are in the range of the falling rocket boosters and satellite debris. Parts of Guizhou, Sichuan and Jiangxi are where the debris is expected to fall, and in Guizhou alone, around 200 thousand people are evacuated.]

[UPDATE 2: I’ve received a couple of emails from people suggesting that these sorts of incidents aren’t, in fact, the basis for any sort of US gov’t space policy. That’s true, and I concede that the original title – “One reason why the US won’t collaborate with China on space exploration’ – was a bit over-the-top. Thus, I’ve changed it. The person who emailed me the above comment on the Chang’e 2 booster was writing as a knowledgeable individual who had worked with NASA in the past, and his comment reflected the consensus of some of his colleagues – not the US gov’t. My apologies if the original title implied otherwise.]

[UPDATE 3: In a very detailed, very interesting comment (4, below), Tom suggests that the images in question show a payload fairing, and not a rocket booster. I’ve just emailed the person who sent me the email that set off this post, in the first place, to see if there’s a response.]