Some bloggers have all of the luck. While I’m in Hong Kong, listening to a guy explain that laptop battery fire is actually a “runaway thermal event,” Shanghai Shiok!‘s Christine H. Tan has been wandering around the ghostly 5.25 sq km of prime Shanghai riverbank once home to Expo 2010 [Shanghai World’s Fair]. It’s something that I hope to do soon, but surely by the time I get there, much of it will have disappeared. So I’m going to do something I’ve never done before at Shanghai Scrap: I’m going to cross-post content from another blog. I do this in part because I think that the material will be of considerable interest to the people who have followed Expo through Shanghai Scrap, and in part because Shanghai Shiok! is one of the best-written and most interesting new English-language China blogs out there (think I’m exaggerating? see here and here). She also, it seems, shares Shanghai Scrap’s early and intense interest in the North Korean pavilion and Axis of Evil Square. So, without further ado, an excerpt from Christine H. Tan’s terrific dispatch from the ruins of Expo 2010 …

After five hours wandering around the site, I had to admit that I was disappointed. The Expo was over, I complained to my friend. So far, I had mostly seen piles of scrap metal, a few uprooted benches, some beaten walls. I wanted to see actual demolition. At the very least, I wanted to see a pavilion so stripped that it was unidentifiable.

And then I came upon this: 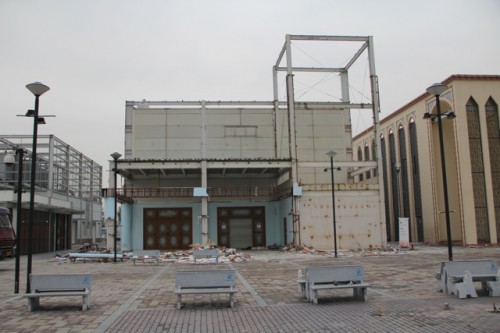 No signage, no trimmings, nothing. Just the bare bones. I knew which pavilion it was, simply because I had been there many times; my friend, on the other hand, had no idea until I told him. A ‘before’ shot of the pavilion, taken in April this year: 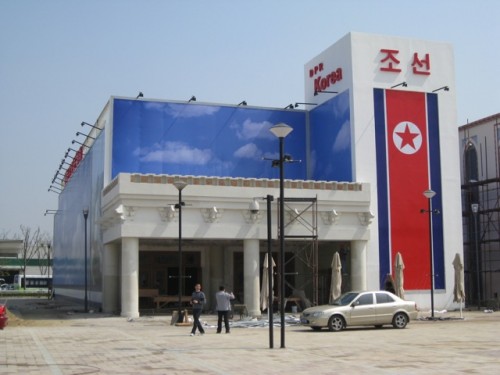 North Korea really knows how to strip a pavilion bare. As far as I could tell, it is the only country that chose not to linger at the Expo.

Read the rest of Christine H. Tan’s dispatch from from the world’s largest demolition site at the Shanghai Shiok! blog …