Last week, in my capacity as a guest-blogger on Jim Fallows’ site at the Atlantic, I wrote a series of seven short blog posts, each accompanied by two photos (except for the last) showing a scene from Asia’s scrap recycling trade. My purpose was two-fold: first, I wanted to give Jim’s readers a peak inside of the often monumental scale of the industry as it’s practiced in Asia; and second, I wanted to challenge the oft-held assumption that people who labor in this industry, especially in the developing world, are exploited. That’s less and less the case, especially in China. For example, the metal sorter in the photo can earn in excess of US$500/month, and have her choice of jobs up and down China’s East Coast – a blessed fate that eludes most recent Chinese college graduates. 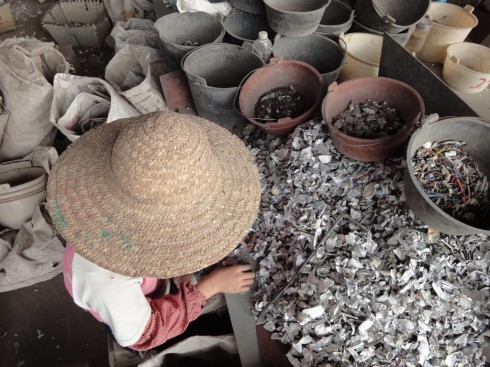 In any case, I didn’t do a very good job of linking to the Wasted 7/7 posts from Shanghai Scrap. So, in case you didn’t see them (or want an explanation of what the metal sorter in the photo, above, is actually doing), below are the chapters of 7/7 Wasted, in the order that they were intended to be read. Ideally, they take you on a narrated journey through how and where Asia recycles the developed world’s surplus throwaways, to what it all means. The posts are short, and – I’m told! – visually arresting:

As I note above, they really do have an order to them, an intended narrative, that leads to a concluding argument about just who’s being exploited by the globalized waste recyclables trade. And that conclusion is, in part, one of the arguments that I’ll make in Junkyard Planet, my forthcoming book about the global recycling trade, to be published by Bloomsbury Press in 2013.