Every week I receive at least one query asking me for pointers on finding statistics regarding how much China recycles on an annual basis. And, for the most part, my answer is the same: check Google, or check the trade publications. For example, a simple google search will reveal that China generated and recycled around 90 million metric tons of iron and steel scrap in 2010 – a volume greater than the steel produced in all but two countries (China and Japan). And if you’re lucky enough to have a subscription to Scrap Magazine, or Recycling International, you would’ve learned, in the Jan/Feb issues of both magazines, respectively, that China generated and recycled 2.32 million metric tons of its own – not imported! – aluminum in 2009 – a volume greater than the total steel manufactured in all but two countries (China and Russia). Below, an image taken at a large-scale, highly efficient aluminum scrap processing operation in South China (by me). 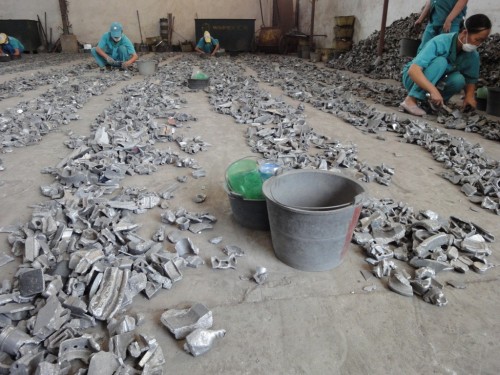 So one would reason, I think, that if an organization – say, the United Nations Environmental Programme – were interested in conducting a study to determine the worldwide recycling rates of all of the metals on the periodic table, that organization would want to get some Chinese experts – industry, government, trade associations – in on the preparation. And that’s precisely what the United Nations Environment Programme claimed to do when, two weeks ago, it released a study claiming to show global rates of recycling for metals. The report is downloadable, and it includes this very simple explanation of its methodology:

The set of global-average recycling rates that we derive represents an order of magnitude estimate that was derived from a review of the recycling literature and informed estimates by industry experts.

So: who are these industry experts? Below, a screen grab of the study’s author and contributor list. Click to enlarge it.

Among those listed are distinguished experts based in the United States, the EU, and Japan. But best as I can tell from the list – and every contributor is identified by nationality – only one of the dozens listed is based in the developing world (in India, to be specific), and none are listed as being based in the world’s fastest growing source of scrap recyclables, including scrap computers, appliances, and cars. How can this be? How can an elite institution like the United Nations Environment Programme fail to include contributors from the developing world when the developing world is disproportionately effected by the the study in question? There are plenty of Chinese academics who concern themselves with the recycling industry, as well as plenty of Chinese  “industry experts” who, I can assure my readers, would be more than happy to provide data on this topic. Why weren’t they consulted? To procure an answer to this important question, I emailed Thomas Graedel, the lead author of the UNEP study, as well as – wait for it – the Clifton R. Musser Professor of Industrial Ecology, Professor of Chemical Engineering, Professor of Geology and Geophysics, and Director of the Center for Industrial Ecology. To his everlasting credit, Graedel provided me with this answer:

We were unable to involve any Chinese participants in our study. However, because most Chinese materials use has occured in the last decade and because materials remain in service for some years, little scrap is yet coming out of China. Instead, as I am sure you know, China is importing large amounts of scrap metal. We can therefore obtain pretty good estimates by involving those now exporting the scrap. Our team involved many industrial partners as well as others, and we feel the recycyling rate ranges we report have a rather high reliability.

Thank you for your interest.

It is a peculiar point-of-view, indeed, to suggest that it is okay to overlook the enormous volumes of recyclable materials generated in China in favor of, rather, studying the material that the developed world exports to China. Especially when, in the case of certain metals – such as steel and aluminum – total Chinese generation of scrap steel and aluminum – exceeds total new US production of those metals (as noted and linked above, in the first graf). Then again, it precisely the point-of-view one would expect from a bunch of academics and so-called industry experts based in the EU, US, and Japan chartered with explaining world recycling rates. And that is most definitely not to their credit. AT ALL.

Now, I happen to think that such a study is a fine idea, and – if executed with proper input from people in China and across the developing world who know what the hell they’re talking about – would be a real contribution to the global recycling industry. Alas, this UNEP study isn’t even close to being that needed study. Unfortunately, because it’s now the only study out there, other academics and – god help us – other journalists are going to take its highly questionable conclusions as reliable inferences, if not outright facts.

That’s a serious pity, because it continues a narrative about the global recycling industry that’s highly biased by the viewpoints of elite institutions, academics, and activists in the developed world with little application, use, or relevance to the recycling industry as it’s practiced in the developing world. There are other ways to look at this industry – and there are plenty of developing world experts out there to help us look at this industry. It’s a pity that the UNEP and its supporters didn’t bother to call on them.

[ADDENDUM: It’s worth noting that, even though participants from the developing world were largely excluded from participating in the UNEP study, the publishers of the study were not shy about illustrating the study with photos taken in the developing world. For example, we have this charming image of (what looks to be) a Vietnamese peasant in a coolie hat carrying bananas and scrap plastics on the back of a bicycle. 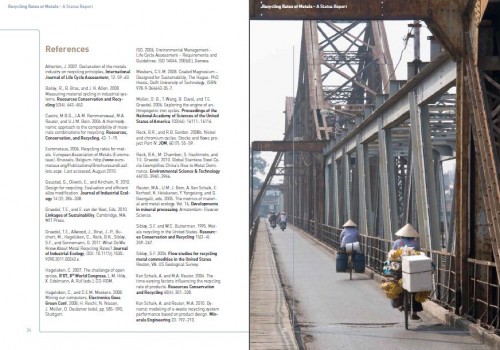 In the interest of promoting an accurate understanding of the developing world’s recycling patterns, I hereby offer the whole of my scrap metal recycling photo archives (several thousand images) for use by the UNEP in any future revisions of the recycling rates study. Best as I can recall, none of those images include bananas in them.]

[UPDATE: Robin Ingenthron of the Good Points Ideas blog, and the founder of the “Fair Trade” recycling movement, points me to a recent EU report on electronics recycling in Ghana. According to the report’s findings, 85% of the electronics shipped to this so-called waste land are actually refurbished for re-use by local technicians (or, using Robin’s term: Geeks of Color); only the remaining 15% is diverted into the oft-photographed (some might suggest, exploited) informal and environmentally destructive recycling sector. So why, then, did the publishers of the report choose to use photographs of Ghana’s ghettos, and burning wire, for the cover images? See that cover for yourself, here. See Robin’s thoughts on the issue, here. And then ask yourself: why is it so hard for NGOs and developed world governments to depict developing world recycling in anything but the most primitive, exoticized terms?]

[UPDATE 2: Earlier this week, the Chronicle of Higher Education published “A Plea for Real-World Research,” a very interesting essay in which the journalist (and my good friend) Mara Hvistendahl explains her difficulty in finding worthwhile academic papers that could support and enrich her reporting on gender balances in Asia. It’s a problem that extends well beyond gender imbalances, of course: I’m quoted in the article describing academic work on scrap recycling as “outdated, oriented toward creating new types of jargon totally irrelevant and indecipherable to the industry that I cover, and rarely concerned with primary source material. I gave that quote before reading the UNEP’s (and Graedel’s) work on recycling rates, but – jargon aside – I think that sums up “Recycling Rates of Metals: A Status Report” quite nicely. There are exceptions – USC’s Josh Goldstein has done extraordinary work on the history of waste and recycling in Beijing, and there is a small platoon of Chinese academics who not only gather real-world data on the country’s recycling industry, but make useful policy prescriptions, as well. Too bad that other foreign academics can’t follow their examples.]