Below, a photo I recently took in a warehouse roughly 80 km from an inland Chinese city with a population around 8 million people. If it’s not clear in the image, those are televisions. Tens of thousands of scrapped, no-longer-wanted televisions.

So let me ask a question of you, dear reader: based upon the information just given, from which country do you think those scrap televisions originated? 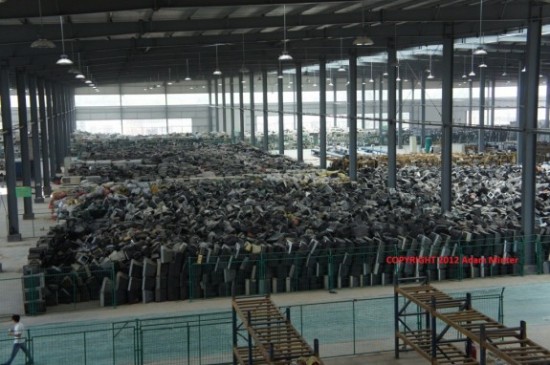 If you are an environmentally aware European or American, your likely answer is … the United States or Europe! After all, two decades of extensive (if often shallow) reporting by journalists and activists have created a very compelling and believable story whereby the developed world “dumps” its so-called e-waste on developing countries like China. It’s a compelling narrative, and one that appeals to the developed world’s outsized need to feel guilty about its presumed effects upon the developing world.

The only problem is: that narrative is no longer the only one available to explain why a warehouse on the outskirts of a major Chinese metropolis is teeming with tens of thousands of televisions (the frame of this photo excludes perhaps another 40% of the inventory present).

That other narrative, which journalists and activists in the developed world have failed to tell (for reasons of their own) is this one: China has grown rich enough to start throwing away its own e-waste. According to China’s National Development and Reform Commission, China is now throwing off 160 million appliances (computers, televisions/monitors, washing machines, air conditioners, and refrigerators) per year that must be recycled, and that number is growing by 20% annually.

In other words: the scrap televisions in this warehouse were all used, and then thrown away, in China. There isn’t an imported – an allegedly dumped – scrap television in the entire lot. 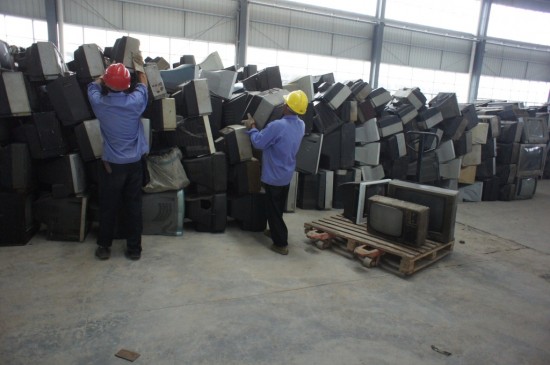 But here’s the important thing: what you see in this warehouse is just a fraction of what’s been generated over the last couple of months in one metropolis in a country that has several dozen of greater size and wealth. You can multiply what you see here by 10,000 and you wouldn’t come close to approximating the number of Chinese-generated waste televisions and other appliances currently being generated, warehoused, and recycled, across China at this very moment. Imported scrap televisions don’t come close to equaling these kinds of volumes.

In Junkyard Planet,  my upcoming book with Bloomsbury Press, I’ll explain the process by which these particular televisions are recycled. The technology is Chinese-developed, environmentally secure, and it actually recovers more re-usable metals, plastics, and glass that comparable systems in the so-called developed world. But more than that, it re-writes the very tired, very incorrect narrative that the best means to recycle old televisions, computers and other appliances is to keep them in the developed world at so-called environmentally secure recyclers (“environmentally secure” being a term that developed countries implement and expect developings ones – with less experience and resources – to follow).  That’s simply not the case, anymore. China, the world’s second largest consumer of consumer electronics, is very quickly figuring out how to be one of its best recyclers of them. The thousands of televisions in this warehouse are just the start.