The ship once-known as the Exxon Valdez is about to become a bunch of structural steel in West India’ s Gujarat state. It a fascinating story about how the ship responsible for the second largest oil spill in US waters (since surpassed by the Deepwater Horizon debacle/disaster) is now going to end its life in a scrap yard located on one of the world’s most notorious beaches. My take on the matter is “The Exxon Valdez’s Eco-Friendly Afterlife,” just posted over at Bloomberg View. Some of the arguments made in that post echo the themes that I’ll explore in Junkyard Planet, my forthcoming account of the globalized recycling markets for Bloomsbury Press. 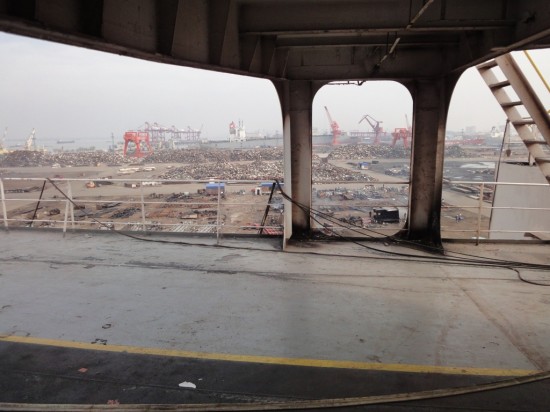 One additional note. Along with e-scrap, ship breaking has an awful, environmentally-ruinous reputation. Some of that is earned, and some of it is over-played. But what’s also indisputably the case is that it’s possible to improve developing world ship breaking, and China is really leading this movement. Above, a photo of an environmentally-secure ship breaking yard not far from Shanghai, in part developed and managed by a major European shipper. I took this image on the deck of an automobile carrier in the process of being dismantled. In the distance is an oil tanker in the process of being reduced to scrap to feed China’s voracious need for steel.

More on this topic soon.