During the run-up to the November 12 release of my first book, Junkyard Planet: Travels in the Billion Dollar Trash Trade, every weekday I’m posting a new photo taken during my decade of reporting on the global waste, recycling, refurbishment, and repair trade. Today’s image shows the hand of a gentleman in Sylvassa, India, as he strips insulation from a cable. As always, click to enlarge. 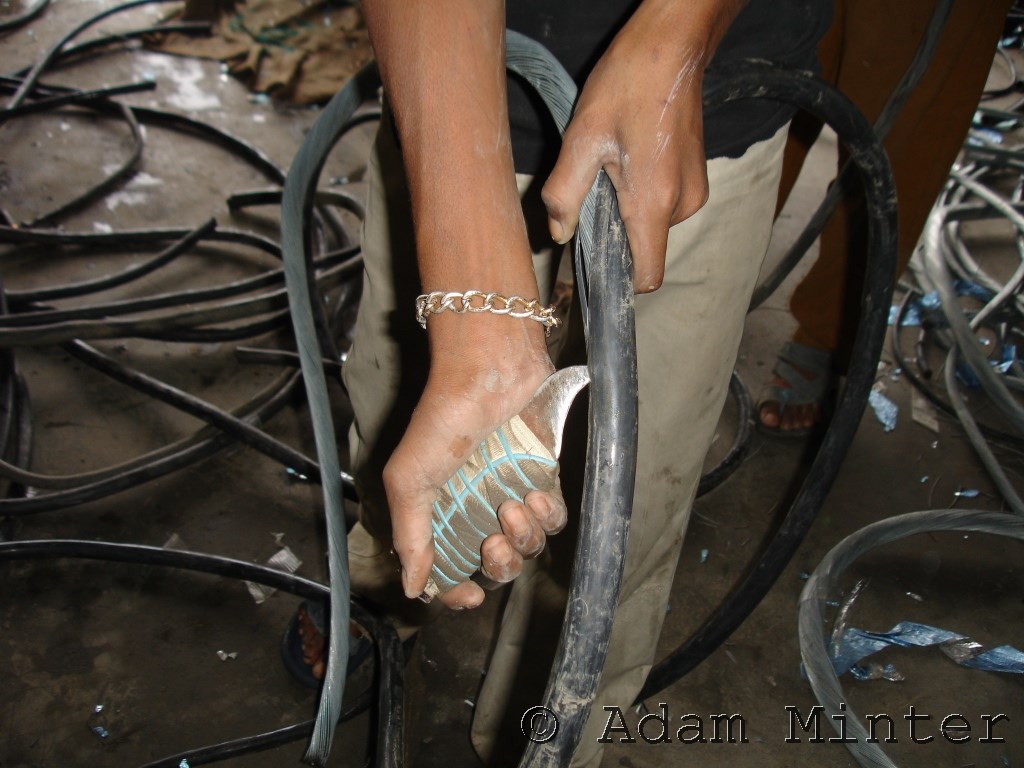 One thing you quickly learn as a chronicler of the global waste and recycling trade is that you just never know where the children of that trade might be hidden. Over the last year, I’ve had emails from lawyers, academics, and business people in non-waste-related industries revealing their family ties to the scrap trade, or just their plain love of junkyards. It’s become so common, it hardly surprises me anymore.

This weekend, however, I did get a surprise.

Here’s the deal: Junkyard Planet is being translated into Chinese for the Taiwanese market (China Times Publishing). This fact delights me for a number of reasons, not least of which is that Taiwan served as the incubator for the Chinese – and really, the modern global recycling industry – from 1950 to 1980. In any case, on Saturday, while working out some details on the translation, I received a note from the translator – a very distinguished figure in Taiwanese letters – who told me this:

“It’s my pleasure to translate your book because it touched my deepest hidden part of childhood memory of striping insulation by hand from very thin wires to help making some pennies. It also reminds me my poor late father and late eldest brother. In 1950s and early 1960s, my family was in such an abject poverty that we nearly could not make it.”

As some of my readers may already know, this isn’t much different than the story that my great-grandfather, Abe Leder, had to tell about arriving in the US from Russia in the early 20th century. He scrapped – meaning, he stripped wires and anything else that might have value – as did my grandmother and her sisters. And that’s the beauty of the junk business – it’s the one entrepreneurial chance you have if you don’t have anything else. It’s not always nice, but it’s there. In any event, below, a photo of what wire stripping, by hand, looks like in India these days. It’s hard but dignified work, and – who knows? – the guy doing it might one day translate one of your books.