During the run-up to the November 12 release of my first book, Junkyard Planet: Travels in the Billion Dollar Trash Trade, every weekday I’m posting a new photo taken during my decade of reporting on the global waste, recycling, refurbishment, and repair trade. Today’s image reveals the low-tech, hazardous means of extracting copper from the surface of circuit boards used in much of India. Click to enlarge. 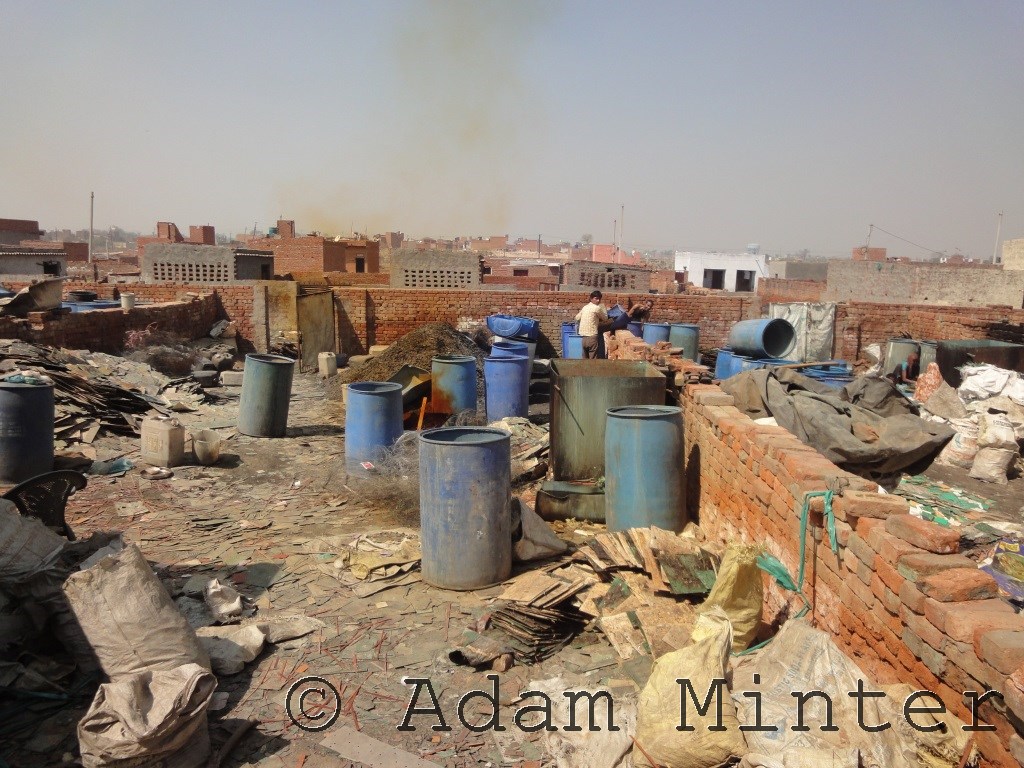 This March 2013 image was taken in Mandoli, a small village roughly 90 minutes from Delhi by car. In it, two men are dipping circuit boards into an acid bath (contained in the various blue plastic barrels) for the purpose of extracting – in effect, dissolving – the copper from the fiberglass. Later, they’ll use another chemical process to refine the copper out of the chemical soup they’ve created. It’s a dirty, environmentally-destructive process and – when done without safety equipment – unambiguously hazardous. Note the orange-ish cloud hanging over the scene; I don’t know what it is, precisely, but I do know that I wouldn’t want to breathe it for long. Also note the denuded circuit boards scattered in the photo’s foreground. According to individuals who helped me find my way to Mandoli, the town recycles most of Delhi’s – and thus, northern India’s – circuit boards. For the most part, those circuit boards come from individuals and businesses in India – not from abroad – and the volume is growing along with India’s middle class and economy. There are good companies putting together good alternatives to this business, and India has a new e-scrap recycling law that should help them along. But it’s going to be a difficult process to ween Mandoli and its residents from this very lucrative business that – according to people involved with it – can earn someone a decent living based on three or four days of hard work – per month.