Five years ago, the first Shanghai/China opening of a major American chain restaurant like Applebees would have been a significant event, drawing homesick American expatriates and curious, affluent Chinese. Under those ancient circumstances, atmosphere mattered more than actual quality, and Western-style restaurants frequently got away with serving sub-standard facsimiles of hamburgers and other staples that wouldn’t be taken seriously in an American maximum security prison (and yes, I’m aware that we’re not talking about Michelin star-rated venues, here).

But those days are long over, and companies like Applebees can no longer succeed in China just on the basis of being a “famous American brand” offering a foreign atmosphere. The Shanghainese (and their expatriate guests) have more than a decade of exposure to American food (at the low-end, McDonald’s; further up, Malone’s), and foreign restaurants which overlook this important fact are not only arrogant – but imminent failures.

Which is one reason that I was so startled to be served an ice-cold beer in a chilled glass — filled with ice cubes – at the first Applebees outlet in China last night (it opened October 1): 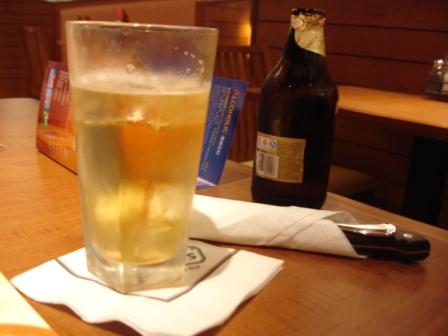 When I complained to my waiter, he rushed to find his supervisor, who patiently explained to me that “American beer is served ice cold.”

[Last night, an acquaintance in the US pointed out to me that the Chinese have been serving beer “American-style” – that is, German style – for almost a century. He makes a decent point. Factually speaking, after five years in China, this was the first instance that I’ve been served beer with ice cubes. Topic for another day: Applebees responsible for Chinese cultural regression? Discuss.]

Below, the full-sized (nasty) Appetizer Sampler (as opposed to the half-plate), including, clock-wise: shrimp and onion quesadillas, seasoned french fries, and deep fried chicken chunks dipped in sweet tasting glue – er, sauce. In the middle, topped by a half-frozen ball of sour-cream, are the nachos — minus cheese. That’s right: cheese-less nachos. 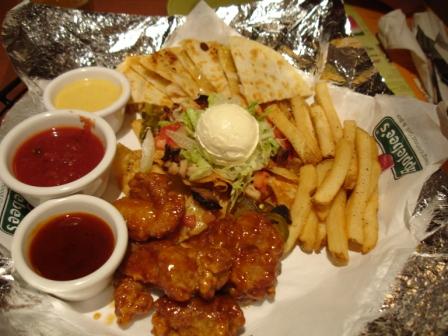 [Addendum: No, I won’t provide an address. If you want to eat there, you’ve gotta find it yourself.]

[Update: Two readers ask why I went to Applebees in the first place. I was there as part of a wider assignment that includes – in a tangential way – Applebees International.] 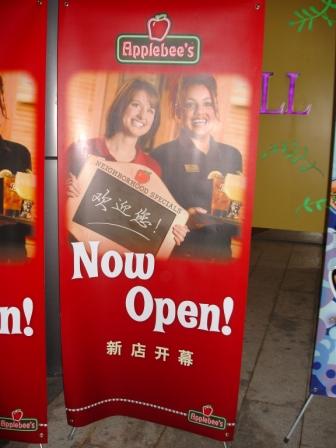