As noted back in July, Shanghai’s US$45 billion makeover in advance of Expo 2010 has arrived at my apartment building (located on a prominent thoroughfare). Despite the inconvenience and noise, this was a needed renovation: my two building complex was built in the mid-90s, at a time when – apparently – highrises covered in dark brown bathroom tiles were all the rage (I’ve seen others). It’s a style that a friend calls “late period authoritarian tasteless,” and I’d be hard pressed to disagree. But anyway, the real question still loomed: what, with their deep pockets and suspect aesthetics, would the Shanghai authorities do to my building?

Well, I’ve been away from Shanghai for a while – long enough to miss out on most of the work – only returning late last night in a dark rain, when I couldn’t see a thing. By morning, I’d forgotten about the renovation – until I happened to glance out the window at an odd approximation of South Beach. On the left, “late period authoritarian tasteless”; and, on the right, “Shanghai South Beach.” Click for enlargements. 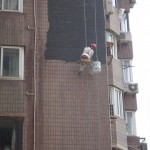 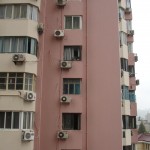 All in all, a stark change, and an improvement – though not the one that I was expecting. One concern: that the facelift was completed in advance of another rainy, sooty Shanghai winter guaranteed to run black streaks down a new pink facade.