As regular readers know, for more than a year I’ve asked the USA pavilion at Expo 2010 (World’s Fair) and the State Department to provide me with a precise accounting of how they’re spending the US$61 million that they’ve raised from private corporations in the name of the United States of America. And, for more than a year, I’ve been met with either a) silence, or b) “we can’t do anything unless the pavilion’s board of directors approves it.” Even if the latter answer is sincere (and I’m pretty sure it’s not), the fact that several of the board members refuse to return my calls doesn’t bode well for my request.

So, rather than bang my head against the pavilion wall, I’ve decided to take a look at what the Internal Revenue Service has on Shanghai Expo 2010, Inc (that’s the name of the non-profit corporation that funds and manages the USA pavilion). And lo and behold, there, amidst a very interesting filing that I’ll touch upon in coming days, we find a June 29, 2009 document helpfully named “USA Pavilion Summary Cost Sheet.” Click the thumbnail document below to expand it. 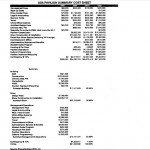 It’s important to keep in mind that the numbers in this document were made a few weeks before the pavilion ground-breaking, and so they may have changed in the intervening months (then again, many of the numbers conform to what I and others have heard around town). Still, in the interest of accuracy and fairness, yesterday I forwarded a copy of the Cost Sheet to Martin Alintuck, spokesman for the USA pavilion, offering Shanghai Expo 2010, Inc the opportunity to comment upon, update, or correct any of the figures. Alintuck has not responded.

Meanwhile, over the weekend I shared the Cost Sheet with two individuals associated in similar ways with Expo 2010, and they were kind enough to provide me with their thoughts on it. I’ve also shared it with someone familiar with Shanghai construction costs, and collated the three responses, placing a handful of the most interesting ones next to the associated costs. Note that the three individuals assumed anonymity when commenting.

Pavilion Construction – $13.248 million. “You can build a quality highrise in Shanghai for that kind of money. You can build a three screen movie theater in the US for less money than that. There’s no way that should cost more than $5 million in Shanghai.” “Way way out of line for China.” 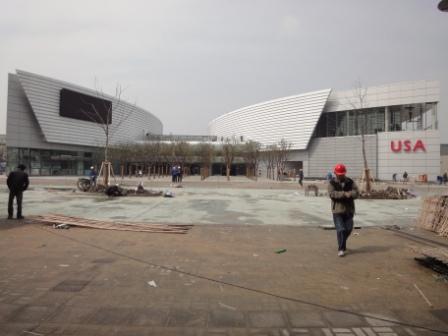 Finish non-show spaces including VIP lounge – $2.3 million. “I’d like to know more about what they put into that VIP lounge. Very hard to outfit a few rooms in Shanghai for that kind of money including comm. equipt etc. What do they have in there? $5k tea sets? Gold plated coffee makers?”

Show construction and installation – $23.72 million [note: this appears to be the three short films (less than 30 minutes) and associated theaters featured in the pavilion; in another IRS document, Shanghai Expo 2010 estimates that it will pay BRC Arts, the film producer, $10 million.]. “[T’]they got hosed on that one. Normally, I would expect show to cost no more than the physical facility cost …”

[Shanghai Scrap note: four of the ten films nominated for the 2010 Academy Award for Best Picture cost less than $23 million – including the winner, The Hurt Locker.]

Teardown/Recycling – $82,790. Speaking as the author of Shanghai Scrap, and based on a near decade covering the Chinese recycling trade, this number is preposterous. The total cost to dismantle and recycle the USA pavilion should be zero. In fact, if the situation is managed correctly, demolition/recycling companies will bid for the demolition rights. Demolition/recycling isn’t a cost; it’s a cash input.

I’m going to open up comments for this one, in hope that folks with experience in non-profit management, exhibit design and production, and/or Chinese building construction might lend some insight into whether or not these expenses make sense. Please keep it civil.