The upcoming Expo 2010 Shanghai (World’s Fair) is an un-apologetically forward-looking event, intended – at least in part – to solidify Shanghai’s place as the Next Great World City. This is all fine and good. But lost in all of this talk of the future is scant acknowledgment of Shanghai’s relatively brief but fascinating past. So, last night, when I received an invitation to attend the unveiling of a restored early 20th century Chinese memorial gate, built and carved for the 1915 Panama Pacific International Exposition (ie, the 1915 San Francisco World’s Fair), I didn’t hesitate to cancel my morning travel plans. Here it is: 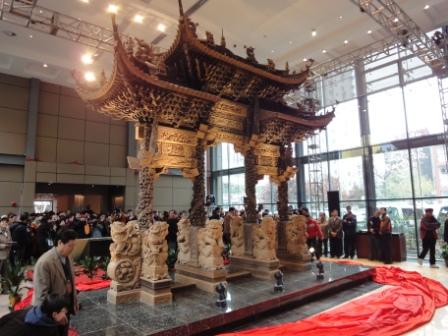 Now you may be thinking: he canceled travel plans for this? And I answer: yes. Because what makes this gate blog-worthy – what makes it formal-unveiling-worthy – is the illustrious history of the mostly forgotten Tushanwan orphanage and workshop responsible for carving it. I’m going to use the remainder of this post (and a train ride to Hangzhou) to explain why. Almost all of the information that I’m going to recount comes from the wonderful ‘Zikawei in History,’ a multi-author history of Shanghai’s once-Catholic Xujiahui neighborhood published by Shanghai Culture Publishing House (a must if you’re interested in Shanghai’s pre-liberation history). The book contains some rough English translations, and I’m going to draw upon – and polish the English where appropriate – along the way. After the jump, we’ll start in the mud hills …

Shanghai’s Catholic history extends back to the 16th century, but it only became the center of China’s – and, really, Asia’s – Catholic enterprise in the mid-19th century. And Xujiahui, a swampy outpost then south of the city proper, was the heart of it. “Tushanwan” – or, in Shanghai dialect “Tou-se-we” – was a muddy, hilly section of the neighborhood (literally translated, “mud hills at the river bend”) where, in 1864, the Church relocated an orphanage from Qingpu County. Below, an early 20th century image of Tushanwan (click to enlarge): 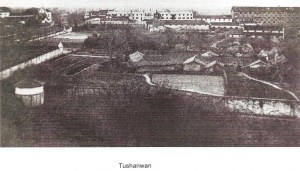 Tushanwan accepted orphans between the age of six and ten, and in addition to providing them with food and lodging, it also provided them with training in a trade:

The training was actually part-time … [I]n the morning, the orphans took courses in Chinese, mathematics, physics, chemistry, geography, and foreign languages; in the afternoon they took religious and craft training courses. The training included carving, carpentry, blacksmithing, and mechanics … [A]fter two years training, the orphans would be sent to different workshops to learn special skills … [t]he orphans worked in the workshops for nine hours per day. After that, in the evening, they still took courses.

There were several workshops, each with a managing director (often, a European Jesuit with significant training and mastery in a craft). Those workshops included: print-making, photography, publishing (Tushanwan introduced modern printing technology to Shanghai), painting (Tushanwan introduced Western painting techniques to Shanghai), stained glass (including the original windows for Shanghai’s cathedral), metal casting (Tushanwan’s pots and pans were used throughout Shanghai; its bells were rung throughout Asia), and wood-working:

The wood department made different kinds of Chinese and Western-style wood articles, including items for home and school use, and children’s toys. The department also carved different kinds of figures, such as people, birds, animals, and some articles to be painted. The workshop’s wooden towers were well-known worldwide, and won medals in Rome, Paris, and the countries of South Asia.

Below, an undated image of the woodworking shop (click to enlarge). 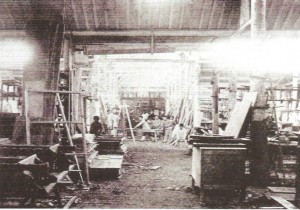 By the early 20th century, the works of Tushanwan were so highly regarded, world-wide, that they were exhibited at the 1915 Panama-Pacific Exhibition in San Francisco (again, that year’s World Fair). In addition to religious paintings, the Tushanwan exhibition included a wooden memorial gate, started in 1912. Below, an image of the Tusanwan room at the 1915 Expo, memorial gate front and center (click to enlarge). 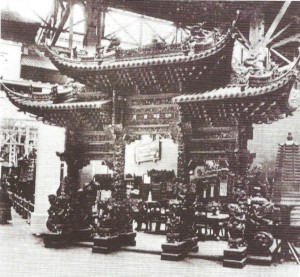 Putting it delicately, there’s reason to believe that the judges responsible for handing out visual art awards at the Expo had, ah, mixed feelings about Tushanwan’s contribution to the Palace of Fine Arts. Eugen Neuhaus, then an assistant professor at the University of California (now, presumably, dead), and a member of the International Jury of Awards at the Expo, published “A Critical Review of the Paintings, Statuary and the Graphic Arts in the Palace of Fine Arts at the Panama-Pacific International Exposition,” in which he wrote of China’s contribution, here:

The … Chinese are taking quick advantage of the guilelessness of the western lover of art, and much that is to be seen in either one of the two sections is rather a concession to western demand than to native Oriental talent … [T]o go into the many religious and other sentimental considerations which are sometimes the basic justification for some very extraordinary fantastic things, charmingly exploited by certain art dealers, is impossible within the scope of this book.

Though he doesn’t specifically refer to the Tushanwan works, it’s clear (to me, at least) that he had them in mind:

There is no real life in any of the work here displayed, and most of it consists of modern replicas – some of very excellent quality – of their oldest and best art treasures. The Chinese seem to be absolutely content to rest upon their old laurels, the fragrance of which can hardly ever be exhausted; but nevertheless that does not relieve them of the obligation of working up new problems in a new way. There is so much religious and other sentiment woven into their art that to the casual observer much of the pleasure of looking at the varied examples of applied art is spoiled by the necessity of having to read all of the longwinded stories attached to many of them … [I] am afraid China is laboring under conditions of internal strife which are detrimental to the development of any artistic expression.

Other judges felt differently, but they don’t appear to have left monographs. Instead, they left medals. Tushanwan won “as many as” 19 medals for its religious paintings at the Expo, most of which were sold overseas. The memorial gate, meanwhile, was also sold, and eventually ended up with a collector in Sweden. Below, a stand-alone, early 20th century photo of the gate (as included in a pack of postcards provided to reporters at today’s unveiling). 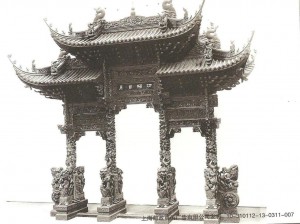 Though there’s really no way to know what the leaders and craftsmen of Tushanwan intended for their memorial gate and paintings, I think it’s probably the case that they were happy to know that they were sold and valued by others. Likewise, I’m guessing that they couldn’t have cared less what some professor at UC thought of it. And I think it’s doubly the case that they really didn’t expect that any of those works would make their way back to Shanghai – especially the large memorial gate. But last year, Shanghai’s Xuhui District government purchased the gate from its most recent owner in Sweden, brought it home, and commissioned a painstaking restoration of the structure. 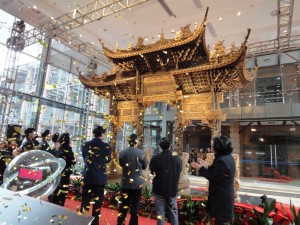 I know next to nothing – actually, let’s be honest: nothing – about Chinese woodworking. But, it’s my post, and I’m going to say that the memorial gate looks terrific, borderline new. See detail below. 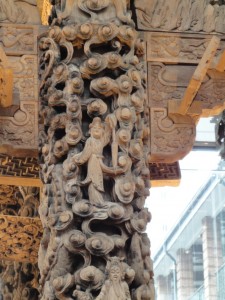 Go see it for yourself. It’s in the lobby of the old Tushanwan buildings. To get there, take Caoxi Road south from Zhaojiabang Road Pass St. Ignatius Cathedral; pass Nandan Road; and then take a right. Half a block down you’ll find it at 55 Puhuitang Road.

Postscript. So what happened to Tushanwan? In 1953, the 200 remaining orphans – and the orphanage – were taken from the Shanghai Diocese, and brought under the control of Shanghai’s Civil Affairs Bureau . In 1956, as the country’s various industries were nationalized, Tushanwan’s workshops were broken off and given to various state industrial groups. According to Zikawei in History: “The Tushanwan Orphanage finally finished its history in about 1960.”

So it goes. But rather than mourn what’s been lost, I’d like to embrace what remains, starting with the illustrious history that this gate represents (critics be damned, damn it). Here’s hoping that, as Shanghai looks forward, it might take a moment to remember the few remaining pieces of the Catholic enterprise that built it (a Catholic enterprise that was almost entirely Chinese), dotted all over Xujiahui.

[Note: I can’t help but note that – as I turned left out of Tushanwan this morning – I found myself staring at a busy construction site where – just one year ago – the Shanghai Film Group (and its low-brow President, Ren Zhonglun) elected to demolish a 150-year-old Carmelite to make way for high-rise luxury housing. Surely, if Xuhui District can preserve a memorial gate, it can find the will to preserve an even older artifact from its past … can’t it?]