For the record: nobody at Shanghai Scrap is in the least bit alarmed that a Chinese national wants to pay more than anybody else for the Liverpool Football Club. We have not read articles about this matter. We have not written blog posts about the matter. In fact, our interest is really limited to one fact: the prospective buyer, Kenny Huang of QSL, has a partnership with the Chinese Baseball Association, and the youth wing of that association just won a youth tournament over Japan, the United States, Taiwan, and several other baseball playing countries – on its first try. For years, we’ve argued that China has a glorious future on the baseball diamond, and this feels like sweet affirmation.

It also provides this blog with the perfect excuse to run a photo of a door that we’ve had hanging around the computer for a week or two. Here’s the deal: typically, 推 is translated as “push.” But on Shanghai’s Xinle Road, it receives a more sporting interpretation: 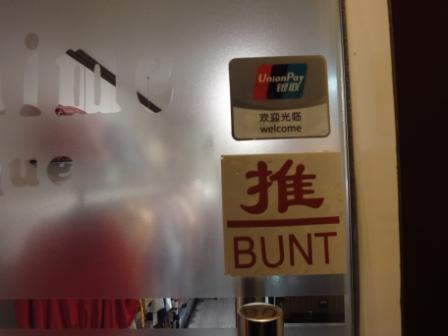 For my many non-American, non-baseball loving readers, a bunt occurs when a baseball batter taps the ball forward, rather than swings at the ball (wikipedia has an excellent entry on the bunt; e-how will give you detailed instructions on how to bunt; youtube has a treasure trove of bunting videos).

Is this an instance of Chinglish? After several lengthy discussions on the subject, I argue that it’s not (and thus does not violate Shanghai Scrap’s One Chinglish Post Per Year rule). Rather, what we have here, is poetry: to bunt is to push the ball, and the act of bunting often looks – if you squint – like somebody pushing open a door. Or something like that. Reluctantly, I open comments.

[NOTE: For those who don’t follow baseball, Cooperstown is the home of the Baseball Hall of Fame.]